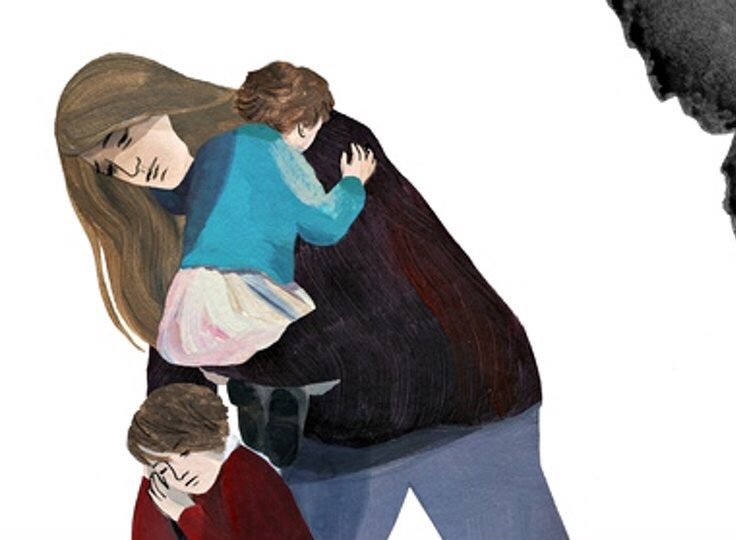 About a year before the absolute end of the relationship, I knew that I needed to leave him. I knew that the level of damage and despair he was causing our children and myself was fast approaching an irreparable magnitude. Even more influential in my motivation was also the feeling that I now wanted to leave him, but I wasn’t definite about how or when I would get that opportunity. The only certainly I felt about my retreat from his hell was that either, the end would come and something horrific would happen or, something horrific would happen that would cause the end to come. I was right…

For a while he had been living with us on and off. He would stay with family or friends for weeks at a time and then intermittently be back with us a few nights a week, mostly on weekends. This abnormal family routine is how we spent the final year of the relationship and it was the result of his previous violent and reckless behaviour which had seen him removed from my house. Following that incident came a period of apologies, promises, death threats and initial actions to seek professional help which enabled him to orchestrate his way back into our lives, and back into our sanctuary, if only sporadically. Throughout this year we went through stretches of calm however, tension would always eventually build through him sulking or getting upset for seemingly fabricated or trivial reasons, as if he wanted to provoke drama. The days would once again become nerve-wracking unknowns which kept me living in fear and with no sense of balance. The abuse would begin again and the cycle simply perpetuated.

Christmas 2015 was one such period of calm, despite him being unwell, it was reasonably uneventful and a stark contrast to the year before when he had head-butted me leaving one side of my face black and blue. This Christmas was different though as we had gone away with my family which provided solace for me as they were a strong protecting factor right through his reign of terror. My ex would never be abusive in front of my family, he was mostly incredibly attentive and outwardly affectionate. He would always go above and beyond to be helpful domestically and would be incredibly generous in his offers to help someone with a task or a job at a later date. Despite his performance of devotion, my family were not totally blind to his true character, as rarely would he follow through with these commitments.

After the joy of Christmas had subsided and the reality of day-to-day norm had crept back in, the pressure began for him to move home permanently as if two weeks of pleasantries should have been enough to have earnt him his family back and proven that he had changed for good. The truth was, I knew this routine too well now and I didn’t want him back in my home. I had finally managed to get life into some sort of weird, but functional state of equilibrium where living separately kept him at arms length and limited his opportunity for abuse, but remaining in the relationship and spending time with him irregularly gave him a little bit of what he wanted, preventing a tragedy that would definitely ensue if I were to leave him.

My reluctance to let him move back in was not purely for our physical and emotional safety, but also for our financial security. Financial mistreatment is quite common in abusive relationships and it is usual for the abuser to scrutinises spending, stop partners working and control the amount of money available. In most cases that I have read about the victim becomes financially dependent on the abuser which stitches  them even more tightly into the relationship and makes leaving their abuser even more complex and daunting. For me it was different. My abusive ex-partner was incredibly irresponsible and couldn’t really take care of his finances very well. Throughout his 20s he spent frivolously on clothes, holidays, food and nights out but rather that curbing the habit as he got older and gained responsibilities, his inability to spend wisely left him with no real assets as he approached his 30s. I didn’t see this as a problem when I first met him as money was of course no object. I owned my own house so it seemed straight forwards for him to move in with me and begin contributing half to utility bills and necessities. The theory of this was sensical and common practise amongst pretty much all cohabiting couples I knew, but in reality for us it never actually worked. Even after we had a child together, my ex would spend what he wanted of his wage on himself and would give me whatever remained towards bills. As his life became increasingly chaotic and most of his wage was being used to buy drugs or alcohol (unbeknown to me at the time) he frequently gave me nothing. There were times when I was desperate for money and unable to support a family of four on my part time wage. He would often tell me that he had some money coming in shortly, that he was waiting on customers to settle payments, or that he was waiting for cheques to clear, but more often than not, the money would never come. Our financial situation deteriorated and I would get upset and panic-stricken at the thought that I would not be able to feed my children or pay the mortgage. He would fly into a rage and feel insulted if I brought my concerns up with him or queried why he couldn’t or wouldn’t contribute.

The financial relief when he moved out was huge and life altering for my children and I. It was one less trouble weighing me down and with all the other chaos he brought to our world, I wasn’t prepared for him to move back in and plunge me right back into financial darkness. Furthermore, he had stopped engaging in his drugs and mental health support as he felt he could manage his aggression and addiction better on his own. His abuse of drugs and aggression was a prominent feature in his life before we met and he blamed his 12 years in the military and childhood for this. It continued and worsened throughout our relationship. When he lived at home he insisted that I was causing these shortcomings by not making him feel loved and not being supportive. After we began to live separately, in order for him to seek help for his issues, he blamed his inappropriate behaviour on my not allowing him to move back in with us. He was constantly redefining the situation so that the problem was never with him, but always with others and this was exhausting. I could see that he was becoming more dangerous than ever and although I was trying my best to distance myself from him he wasn’t prepared to let me go.

It was now March and I had been persevering with normality despite his increasingly volatile behaviour. He had once again become the man he vowed we would never see again and I was becoming evermore cautious of his weekend visits. It was a relief to me that on this particular weekend he wasn’t staying with us due to an incredibly fraught week and instead, he had arranged to meet some friends which was unusual.The weekend previous to this, he had come to stay, bringing beer along with him and breaking a previous promise he made never to drink again around me and the children. I was scared, so I went upstairs to lay on the bed, he continued to drink and later that night he was physically and emotionally abusive. Worse than that, he woke up the children with his rage.

In spite of his plans that following weekend and without warning, he welcomed himself into my home once again, high on drugs and absurdly drunk. It was 8 am on Sunday morning. He crept in through the back  door which was unlocked and as soon as I saw him I asked him to leave. I knew only too well that him being drunk meant violence was to come.

He of course refused to leave, and seemed insulted that I should even ask that of him. I put shoes and coats on my children and started t0 move towards the door but he wouldn’t let us leave. He attempted to break my hand in order to stop me from driving my car. Over the next hour he held me and the children hostage in our own home and subject us to an unimaginable horror. I screamed for my life repeatedly as he thrashed at me and put his hands around my throat and taunted me with the prospect that he wasn’t going to let me leave the house alive. I’d been through this atrocity with him before on too many occasions, but this time was different. He frequently threatened me with violence and harm, but he’d never threated to end my life before. I could see the black in his eyes and the realisation that he had exhausted my tolerance and forgiveness and he had nowhere else to go with his manipulation.

The emotions I felt during that hour were some of the most powerful I have ever felt in my life. The overwhelming fear of believing I was going to die took me into a strange out of body experience where I perceived that I was watching myself in hell from afar. I felt an inexpressible loathing for him and a desperation that could have compelled me to kill him if only I had been given half a chance. Above all, the most prominent response I felt towards him that morning, and the emotion that ensured I would never accept another apology from this man, was disgust and condemnation that he could allow our children to be part of something so horrifying and destructive. To this day, I still have not recovered from those feelings and it fills me with intense guilt. He was their father. He should have been demonstrating nothing but love and gentleness.

I’m eternally thankful and indebted to my neighbours, who rescued me and my children that morning.